I’d like to share an inspired project friends of ours Seth & Cris Phillips and their daughter Katia, have going in Guanajuato, a jewel of a city in Mexico’s central highlands.
Several years ago Seth & Cris purchased their large, rundown city lot in the heart of bustling Guanajuato and set to work. The first couple of years were spent tearing down numerous, decrepit, old adobe structures, and creating a comfortable house and guest cottage in their stead. Where most “normal” people would have done away with the old adobe, Seth, a committed recycler, painstakingly stacked and saved the adobe blocks which have since been repurposed into a beautiful expansion of the living space. Over the years the family has also created wonderful Permaculture gardens and other systems (although I don’t think I’ve ever heard Seth or Cris call it that exactly). 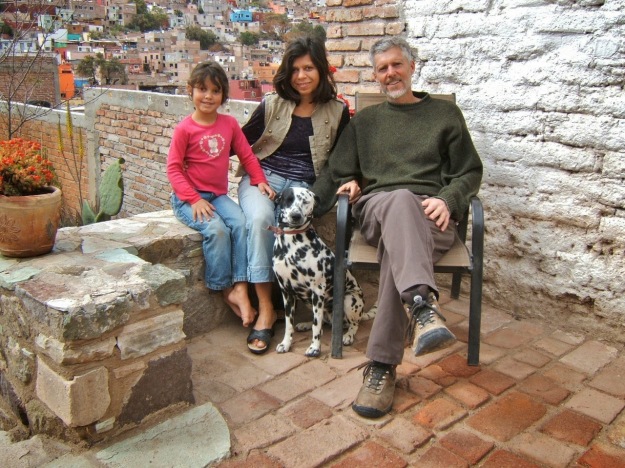 Seth, Cris, Katya & Pecos at home in their urban garden…
Every time Holly & I visit there are fun new additions to take in, and we always find the project inspiring in its modestly. In particular, and unlike me, Seth is a minimalist who always searches out low tech solutions to energy & water usage challenges. While swapping ideas, we often share a friendly partier about his ultra basic approach vs. the more costly and complicated solutions I am usually prone to. “Why go to the time and expense of building an elaborate solar cooker”, Seth will chide me, “when a simple foil reflector blanket and black, cast iron pot can cook almost anything”? Hmmm, perhaps he has a point!
During the early renovations Seth created grey water storage and a network of direct irrigation channels and tubing to help sustain the various plantings during Guanajuato’s dry stretches which can last for months on end. Gradually, shade from the 30+ fruit trees is replacing the harsh noontime glare, and the walled, interior garden space is now a profusion of vegetable gardens, pathways, and chicken coops. Every day Seth feeds the chickens buckets of fruits and vegetables discarded from the neighborhood fruteria.  Once a week the resulting organic material is shoveled out of the chicken run and into a compost that is used to improve the soil. 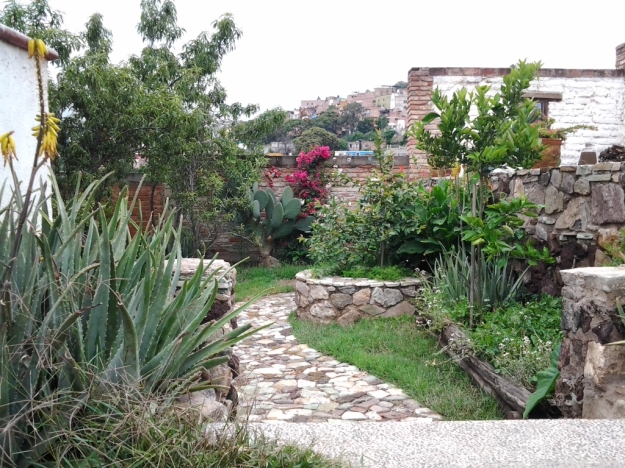 The Gardens…
Along the way Seth has also puttered around with various low tech energy saving add-ons including a home-made solar food dehydrator, solar water heater, solar distiller, a rocket oven, a “humanure” style composting toilet, and a hay box cooker.
The most recent addition is a 20,000 litre water collection cistern capable of spanning the ever longer water outages the city suffers.
As the oasis grows greener, Seth and Cris remain committed to simplicity and a pragmatic yet seemingly joyful exploration a the good life, right there, in the heart of the city!